One Stop Solution
for Data Loading
in Oracle EBS R12 / 11i 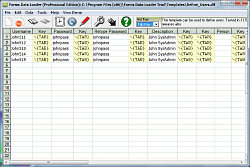 Forms Data Loader (FDL) is a tool to load data from Excel or CSV files into Oracle Apps 11i / R12 through front end forms. It provides an easy to use and cost effective solution for loading test or legacy data into Oracle E-Business Suite. Although it is specially built for loading data into Oracle to load data in any application Forms running under Windows like SAP and others. Requires no special technical knowledge and can be used by any non technical end users as data is loaded through front end.

Comes with state of the art HTML Forms Data Loader to load data into Web Forms or Oracle Applications Self Service Forms which provides 100% reliable loads without needing any complex setups. A must have for Oracle R12. Supports Oracle R12.1.x and also Oracle EBS R12.2.3 / R12.2.4 / R12.2.5

Load thousand of rows into Web Based Forms through Record and Playback feature. Completely reliable loads with error control

Why use Data Loader?


"Do Not Use Database Tools to Modify Oracle Applications Data

Oracle provides powerful tools you can use to create, store, change, retrieve and maintain information in an Oracle database. But if you use
Oracle tools like SQL*Plus to modify Oracle Applications data, you risk destroying the integrity of your data and you lose the ability to audit
changes to your data.


Consequently, we STRONGLY RECOMMEND that you never use SQL*Plus, Oracle Data Browser, database triggers, or any other tool to
modify Oracle Applications tables, unless we tell you to do so in our manuals. "

Oracle does provide Open Interface tables but, it is tedious exercise to load data using Open interface tables.  Our tools are useful as they load the data from Front End Forms as though entered by a user and thus all the validations are performed.

Forms Data Loader fills data in Forms by simulating keystrokes as though type by a user. It provides a spreadsheet interface where you can enter the data and keystrokes to send to the forms. Building Load is quite easy, you can learn building data loads by just spending few minutes. We provide a series of demos which demonstrates how the loads are developed and how FDL works. Although it is specially focused to load data into Oracle ERP Applications, it can be used to load data in virtually any type of application form whether it is SAP or HTML or any other application More...

Using this feature Forms Data Loader can be used to load data accurately and several times faster than Macro Loading. It is more reliable, the load will stop whenever an error comes, It is because Oracle Forms will execute the load. You use Forms Data Loader just for developing the load.

Using this method you can load the data in Oracle Apps by performing the following Steps.


Step 1
Run the Oracle Application Forms in record mode and enter 2 or more records in whichever form you want to load the data.


Step 3
Then Play the file saved in Step 2 by running Oracle Application Forms in Playback Mode.


This method is accurate and handles all errors and nearly 10 times faster than macro loading.

Which method should I use?